Noir at the Bar T.O. style 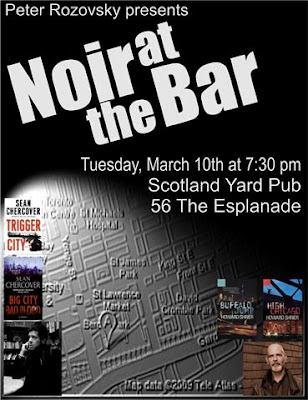 I'm very excited to announce Noir at the Bar Toronto featuring Howard Shrier and Sean Chercover. Peter Rozovsky will be asking very tough, insightful questions (if his Noir at the Bar in Philadelphia with me and Declan is any indication).

Tuesday, March 10th at Scotland Yard Pub,56 The Esplanade, one block east of Yonge Street and one block south of Front Street.

Should be fun.
Posted by John McFetridge at 3:16 PM 8 comments:

The Bridge picked up by CBS

The TV show I'm going to start working on next week, The Bridge, has been picked up by CBS for broadcast in the USA, probably in the fall of '09.

A website called TV, eh has all the info.

Written by five-time Gemini Award winner and six-time nominee Alan Di Fiore (DA VINCI’S INQUEST, THE LIFE, THE HANDLER), THE BRIDGE peels away the veneer of a big-city police force to reveal the political machinations underneath. After the rank and file unanimously vote street cop Frank Leo (BATTLESTAR GALLACTICA’S Aaron Douglas) into office as union head, he begins his quest to put street cops first and clean up the force from the ground up. But the old boys’ network running the police force and the city’s self-serving politicians are not about to sit idly by while a former street cop makes up his own rules. Frank walks a thin blue line as he battles wiretaps and a concerted campaign to bring him down, letting nothing stop him from fulfilling his unwavering vow that when cops are in trouble, he will be there.

Gemini Awards are the Canadian version of the Emmy Awards. Five-time winner, Alan Di Fiore. I'm looking forward to learning from him.
Posted by John McFetridge at 8:27 PM 11 comments:

Flash Fiction Challenge: Pass It On

The challenge from Patti Abbott, Gerald So and the Mystery Dawg as explained by Patti:

Write the first paragraph of a story, send it to me by January 20th. I will stir the pot and send it back out to another writer. Write a 750 (or so) word story using it.

There's a list of all of today's stories on Patti's blog here.

Here's the story I wrote:

The first time George Heartwell e-mailed the writer, Margaret Roberts, on June 22nd, he suffered all morning. He re-read the letter over and over and wished to hell he hadn't ever done such a stupid thing. Christ, what was she going to think?

Well, she was going to think she was being blackmailed, sure, but what would she think of the writing?

“There are cameras everywhere, Margaret, in phones, in pens, in computers - some even look like cameras. There was one on the eleventh floor of the Lord Baltimore Radisson at Bouchercon.”

He wanted it to be the fewest words possible, noir style, none of that purple prose like her cozies. Her bestselling-around-the-world cozies.

Now here it was almost winter and George was driving highway 21, looking for the entrance to a closed provincial park for his meeting with Margaret. They’d gone back and forth for months, she’d answered his email with a simple, “What do you want?”

That surprised him, he’d expected a denial or some excuses, some convoluted story about it being a misunderstanding, how there was nothing going on really, but she got right to the point. Not very cozie-like at all.

Back then George’d wanted to get her help with agents and publishers but she pointed out their writing didn’t really have anything in common, people would suspect something was going on between them if she started showing his work around – her husband would find that suspicious for sure.

So he settled for money and Margaret asked him to meet her at the Ipperwash Provincial Park on Lake Huron. It had been closed since a group of Native protestors took it over claiming it was on native lane – it probably was for all George knew – and Margaret and her husband lived in an old farmhouse somewhere nearby.

He’d expected more trouble getting into the park but he just drove in like Margaret told him in her email. Typical Canada, there was a sign that said, “Closed,” but no locked gate or anything. He drove a few miles through the woods until he came to the Park Store, the building boarded up and falling apart. The parking lot was surrounded by trees, the perfect location for a drop. Well, not perfect like it would have been in one of George’s books, some back alley all gritty and dark, or a massage parlour.

George parked and waited. He had a copy of Margaret`s latest book with him and he thumbed through it. The author photo was pretty good, she looked great for a woman a little over fifty and he liked the first page; a woman walking her dogs comes across a guy who committed suicide in his car, attatched a vacuum hose to the exhaust pipe with tape and ran it through the trunk.

Everyone bought the suicice except the woman walking her dogs. George couldn’t believe these cozies, amateur sleuths, the woman was a professional dog walker and now she’s investigating a homicide. Who buys this crap?

He was well into the book when a dog barked and he almost had a heart attack.

There was Margaret Roberts, walking out of the woods behind two dogs, a big German Sheperd and some small fluffy thing. Maybe that photo wasn’t retouched, she looked good.

George got out of his car and said, hey. Margaret nodded at him, said, hello, as she was opening the black bag she had over her shoulder. It was the bag from Bouchercon, the Charmed to Death logo in white, the bracelet with the little charms, the skull and the gun and the switchblade.

She took out a thermos and asked George if he’d like some tea. He said no and Margaret said, “How about a little Bushmills then?”

Margaret poured a little into the thermos lid and handed it to George. He drank and coughed a little and said, “Very good.” Then he said, “Do you have my money?”

“Get right to the point why don’t you?”

George drank the rest of the Bushmills and Margaret poured him some more, saying, “Don’t you think it’s beautiful out here?

George said, “I guess,” and Margaret said, “Not like one of your hardboiled stories, of course, but like a cozie.”

“I suppose people get blackmailed in hardboiled stories all the time?”

George said, yeah they do. He couldn’t believe this chick, hadn’t she ever read Hammet? Or even Robert B. Parker?

“People sometimes get blackmailed in cozies,” Margaret said. “But do you know what happens more often?” She was looking right at him now but going out of focus, saying, that’s right, “They get poisoned.”

George’s knees started to give way and he was falling over, his face hitting the gravel hard but he was already numb.

He could see Margaret getting something out of the black Charmed to Death bag, a vacuum cleaner hose and a roll of tape.

She said, “Not everyone gets published George, it’s no reason to kill yourself.” 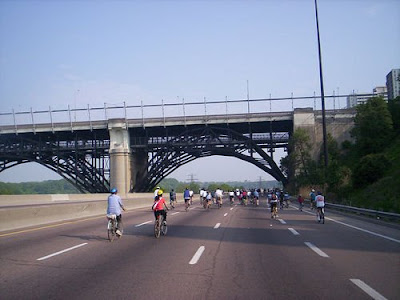 Recently at a discussion panel of true crime writers, one of the questions asked was, "Have you ever been threatened by any of the people you've written about?"

Most of the writers on the panel had written books about some really dangerous people; serial killers, hitmen, bikers and high ranking organized crime figures.

But the guy who answered the question said, "The only time I've ever been scared or threatened was by cops." The others all agreed. These experienced, award-winning journalists-turned-authors had all at some point been scared by police.

Which brings me to my new job. I've been hired as one of the writers on a new CTV cop show, The Bridge. The show is based on a cop who was head of the police union in Toronto, the self-professed, "most powerful cop in the country." The show was apparently pitched as, "What if Tony Soprano was a cop?" In this case he's a cop who helps other cops, gets them out of trouble and stands up for them to the brass.

Which could make for some very cool and controversial storylines.

Especially if cops are the scariest people those journalists have ever dealt with.