My contribution to the new DS anthology, Collateral Damage, is a short story called Pulp Life – Episode One; The First Rule.

The reason it’s called “Episode One” is because I adapted it from the pilot script to a TV show I was pitching. I have a few more episodes in script form and I may adapt then into short stories as well, if anyone is interested in them.

Here’s how the story begins:

They’re sitting in Angelo’s BMW X5 in the alley behind East End Scrap Metal, been there less than ten minutes when Angelo says, “There he is,” and pulls the ski mask down over his face.

Danny’s looking in the side mirror, seeing a skinny guy getting out of a pick-up carrying a white plastic bag full of take out go up to a steel door with no handle on the outside of it and knock. Danny says, “Okay,” and pulls on his ski mask.

Getting out of the Beemer Angelo says, “You do the talking, they might recognize my voice,” and Danny looks at him, all three hundred pounds, and says, yeah, right, “That’s how they’ll know it’s you.”

Now Danny’s moving down the alley watching the kid as the door opens and Angelo says, “Right?”

For such a big man Angelo is fast, pushing past Danny and going up behind the kid with the take-out, slamming into him and the guy who’d opened the door, sending them both sprawling into the room beyond.

Danny gets to the door and steps into the office, seeing the kid and the guy who’d opened the door still on the floor and Angelo holding his gun on them – and on the six guys sitting around the table covered with money and cards.

And no one’s saying anything. For what seems like fucking forever until one of the card-players, Little Mickey, says, “So?”

The card players all sigh and shake their heads slow and make a big deal of pushing back their chairs and Little Mickey says, “You assholes are dead.”

Angelo tosses a gym bag to Danny who starts picking up all the money on the table and then a book falls off and makes a loud thud on the concrete floor and Danny looks down at it, trade paperback of Wiseguy by Nicolas Pileggi, and says, “Who’s reading the book?”

No one says anything.

Danny leans forward, points his gun at the closest guy and the guy just shrugs so Danny holds his gun in both hands and points it at the next guy and says, “Who’s reading the book?”

No one says anything. The whole place is tense, about to explode and Little Nicky says, “For fuck’s sake, Vinny, the novel?”

Danny says, “It’s not a novel,” and Little Mickey shrugs and says, “What the fuck?”

Everybody at the table is staring at Danny, not saying a word, no idea what the fuck he’s talking about and Little Mickey says, “It’s a fucking book.”
Danny grabs the rest of the money and says, “No one reads novels anymore.”

And Angelo shoves him out the door.

A guy named Angelo Gonidis had been a member of the Rebels motorcycle gang in Toronto and was getting out of prison after six years and he’d written a book. A memoir. Sarah said it was good, while he’d been in prison the Rebels had patched over to the national Saints of Hell and become big business and Angelo was pissed off about that and was telling everything in juicy detail but the writing was terrible. She already had publishers interested (bigger publishers than the one publishing Danny’s books) and even a movie deal in the works.

So Danny agreed to ghost write it and went and visited Angelo in Millhaven Maximum and they got along pretty well. Once every couple of weeks for six months Danny took the three hour bus ride from Toronto to Kingston and sat in the visitor’s room with Angelo and listened to his stories. At first Danny figured if Angelo’s book was no good he could use the stories in his own crime fiction and then Angelo made parole.

It was a bit of a surprise. He’d told Danny before the hearing that it would probably take him one more time, see the nice people again in another eighteen months, and Danny had said, “So that’s what this is about,” and Angelo’d said, “What?”

And Danny said the whole book deal was just to look good for the parole board and Angelo said, “No way, man, I’m serious about this,” and Danny had to admit that Angelo’d read all the books he’d dropped off, The Friends of Eddie Coyle (Angelo said, is this guy supposed to be a loveable loser?), Swag (gotta watch out for the chicks), The Big O (get better guns, man, and again, watch out for the chicks) and a couple of the biker memoirs (be better of they weren’t trying to suck up so much and pretend they didn’t like what they were doing).

So, no doubt, Danny liked Angelo and wanted to help him.

But the thing was, Angelo wasn’t finished with his life of crime and he took Danny along. They’d been at it a week, robbing Angelo’s old buddies, his partners in crime, as he called them that didn’t want him back. So fuck them.


And it goes from there. Nerdy writer Danny gets better and better at crime and lifelong criminal Angelo gets more and more interested in writing a really good book.

It was supposed to be one of those half hour cable series like Entourage or Weeds, a comedy but with sex and violence.

So, what do you think, should there be more episodes?

And if you'd like to read the whole story, it's in the anthology, Collateral Damage, available for the Kindle here.
Posted by John McFetridge at 12:58 PM 3 comments:

Just In Time for Father's Day - a DSD collection 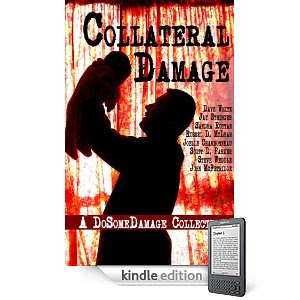 Once again the eight authors of DoSomeDamage.com bring together eight stories of murder and mayhem in these linked stories.

TERMINAL DAMAGE, a Spinetingler Magazine nominee for best anthology, featured stories linked together by one awful day in an airport.

The brand new COLLATERAL DAMAGE builds on the success of the earlier collection, this time focusing on Father's Day.

From the introduction:
Collateral Damage:

A Father’s Day Collection of Mayhem

To follow the immense fun -- um, I mean HUGE FINANCIAL SUCCESS -- of our TERMINAL DAMAGE collection, we came up with this book.

TERMINAL DAMAGE was tied together in that all the stories took place at an airport on the same day – when all hell broke loose.

The eight stories in COLLATERAL DAMAGE are tied together by Father’s Day. Revenge, mysteries, killings and more bleed through the pages of this book.

We hope you enjoy this one as much as folks seemed to enjoy TERMINAL DAMAGE.
Posted by John McFetridge at 11:39 AM No comments:

Labels: Collateral Damage, Do Some Damage, Terminal Damage
Newer Posts Older Posts Home
Subscribe to: Posts (Atom)
In just three novels McFetridge has demonstrated gifts that put him in Elmore Leonard territory as a writer, and make Toronto as gritty and fascinating as Leonard's Detroit... (McFetridge) is a class act, and he's creating fictional classics -- maybe even that great urban literature of Toronto the critics now and then long for.
-- The London Free Press