This past weekend, many newspapers in the Sun chain (Vancouver, Calgary, Edmonton, Winnipeg, Toronto and Ottawa) ran Joan Barfoot's review of Everybody Knows This Is Nowhere, which said some nice things about the book, calling it, "an absorbingly complex tale that combines the concerns of troubled cops with accounts from an underworld of bikers, the Mafia, sex-trade workers and ethnic-based gangs."

"As Everybody Knows This is Nowhere beautifully shows, change depends, timelessly, on the inclinations, depravities, ambitions and hopes of individual humans out to do their best, or their worst, in the world."

Some of the papers also ran this really cool illutration by Tim Peckham. 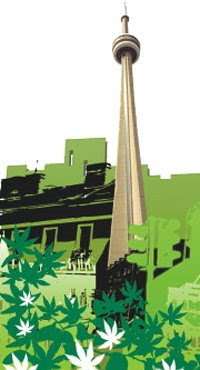 Posted by John McFetridge at 9:55 AM 5 comments:

The National Post newspaper runs a daily feature in its Arts and Life section in which someone keeps a diary for a week.

This week it's me.

I kept the diary back in June. It was fun.

Peter over at Detectives Beyond Borders tagged me with the question, What three authors would you miss the most if they stopped writing?

Like most people, I'd have a tough time narrowing the choice down to three and lately it's been getting even harder. I was thinking about a blog post just yesterday, wondering if we're in a new golden age of crime fiction.

In 2006 I attended my first Bouchercon (and I'll be going again this year) and I met a whole bunch of writers; Mike Harrison, Robert Dugoni, Sandra Ruttan (in person!), Duane Swierczynski; I was on a panel with JD Rhoades, Brett Battles, Bill Cameron and Michael A. Black; I said hello to Lee Child, Gary Philips and Don (I have a problem with impulse control) Winslow and lots of others. When I got home I started reading books by people I'd met, and to be honest, I didn't expect to like many of them.

I liked them all.

Am I getting soft in my advancing years?

Since then I joined CrimeSpace and met Barbara Fister, Jon Loomis, Donna Moore, Linda L. Richards, Patti Abbott, Angie, and lots and lots of other writers and I've been working my way through their books. And they're all good.

What happened to the snarky, cynical hard to please jerk I was?

Last year I "met" online Declan Burke, Ray Banks and Al Guthrie, so I read their books and you know where this is going...

Pretty much all of these writers are younger than I am, so I'm looking forward to years and years of happy reading. As Barbara Fister says, "I'll read till I die and I still won't be finished!!"

So, it's a great time to be involved in crime fiction.

But to try and answer the question, I'm going to go with:

Elmore Leonard. Over the last forty years he has quietly laid down the history of a particular slice of America better than anyone else. What John Cheever did for suburban culture, Elmore Leonard does for the working-class. His books are some of the few American books to be truly multi-racial and completely honest. The last few books filled in the gap between his westerns and modern-day novels. Check out Glitz and Swag as two of the very best crime novels ever written.

Alice Munro. Not a crime fiction writer, not even a novelist, but the greatest short story writer ever. She has also chronicled an entire generation, one story at a time, digging deeper into human relations in a single short story than most novelists do in an entire career. Lives of Girls and Women and Who Do You Think You Are would have been a career right there, but she just keeps going.

Roddy Doyle. The Barrytown trilogy was a lot of fun, but The Woman Who Walked Into Doors, Paula Spencer and The Deportees are fantastic. What writing should be.

So, keep writing everybody. It really feels to me like we're just at the beginning of something special here.
Posted by John McFetridge at 9:48 AM 6 comments: