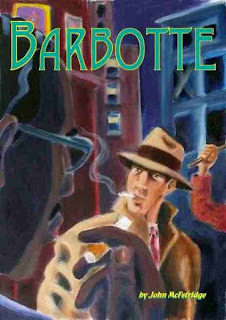 Isn't that just so cool? It's the illustration by Jean-Pierre Jacquet for my story, Barbotte, in the current (and sadly last) issue of Hard Luck stories.

A huge, huge thank-you to Dave Zeltserman and Ed Gordon for doing this. It's a ton of work for them and I really appreciate it.

My story, set in Montreal in 1946, is a tribute to my Dad, who passed away in 1985 and would have been very proud. The main character, Nat Lawson, like my Dad, is a telephone installer who knows everyone in town. As far as I know, my Dad was never involved with gangsters, crooked cops or jazz musicians, but they were there and he was there...
Posted by John McFetridge at 2:57 PM 1 comment:

“With gas prices rising they had to change their plans.”

This was the challenge for a flash fiction. I made the slight change from 'gas' to 'diesel.'

Many thanks to Patti Abbott for asking me to do this. She has a list of the other stories on her blog. 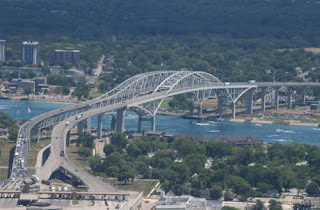 
When they finally got through Toronto, the 401 bumper to bumper for two hours, Ellen relaxed in the cab and said to Rick, “How long till we get to London,” and he said, “Why, you want to pull over for a quickie?”

She said, “You remember when we didn’t even pull over?”

Rick’d been driving long haul for almost thirty years, married to Ellen the whole time. Back in the beginning they rode together, popped in the Allman Brothers on the eight track and saw America. And Canada and a little of Mexico. Then they had the kids and she stayed home and raised them and Rick kept driving, both of them liking the idea of being independent, working for themselves, owning their own rig, being their own boss.

Now the kids were grown, Rebecca in the air force, Allan a state trooper, RJ in college going to be a teacher, and Ellen and Rick were back on the road having the retirement they’d be dreaming of all these years.

Except now it didn’t look like it was going to work out. With diesel prices rising, their plans had to change.

“What else can we do? Got no choice.”

Ellen said, “Yeah.” Things had been getting tight for a while. They’d talked about selling the house but with the bottom falling out of that market they couldn’t get much for it. Rick’d been driving without health insurance for a couple of years now, sleeping in the cab for days at a time even if it cost too much to run the heater, waiting for a load that would at least cover the cost of hauling it.

Walking into the almost empty drivers’ lounge of the Fifth wheel in Dorchester, Ellen said, “Wow,” and Rick said, “Yeah, like a neutron bomb.”

After Ellen said hi to Tommy and got introduced to the other drivers at the table she and Rick sat down and the guys – not all ‘guys,’ Alison and Rachel, too – were back in the middle of their talk. Their bitching. Grant saying, “It’s a matter of pride,” and Wayne saying, “Bullshit, it’s a matter of survival.”

“You know repossessions are up a hundred percent.”

Rachel said they got Ed Kirk’s last week, didn’t even have to chase him, it was sitting in his driveway. “Used to take the bastards weeks, months to get a hold of a rig.”

“When it was hauling.”

Grant said, “What can we do? No one’s building houses, there’s nothing to haul.”

“There’s plenty to haul,” Wayne said, “but with diesel over four bucks a gallon, there’s just no profit. The big fuckers, the nationals, buying it in bulk, paying way less, they can afford it. Drive the independents out of business.”

“You want to go on strike?”

“Right,” Wayne said, “that’ll work. Anyway, we’re an association of independent truckers, not a union, it’s against the law for us to strike.”

Ellen looked at Rick, saw him laughing with his buddies, guys he’s known thirty years, but not looking as worried. Or not showing it.

“We need something,” Rachel said. “These gas prices, it’s costing me a buck a mile to haul, shippers still paying eighty-seven cents.”

“What’s that song,” Wayne said, “another day older and deeper in debt.”

Ellen looked at her watch and said to Rick, “We better get going.”

Wayne said, “It’s not the romantic times seeing the country you were hoping for, is it?”

“Worked your ass off for,” Grant said.

Ellen said, “We gotta do what we gotta do.”

They took the 402 up to Sarnia and got in line with the rest of the trucks crossing the Blue Water Bridge to Port Huron, Michigan.

Rick said, “Are you sure about this,” and Ellen said, “Yeah.”

Rick said, “We’ll be over in half an hour. You know, there was a time there could be five, six thousand trucks a day cross this bridge. You could spend hours in line, a couple hundred bucks in fuel. A wait like that now, there goes your profit on that job.”

Rick pulled up to the customs window and talked to the guy like he had ten thousand times before. Got waived through, drove under the radiation-sniffing portal, said to Ellen, “Spent fifty million bucks, looking for terrorists, nuclear weapons, dirty bombs.”

Just before Flint, Rick pulled off 69 onto 24 south towards Metamora, pulled over in a rest stop and Ellen made a cell call, saying, “We’re here.”

Ten minutes later a motorcycle pulled up, a guy driving and a woman sitting behind him.

Ellen had already pulled the two backpacks, a Transformers and a Bratz, out from inside the mattress in the sleeper – all those precautions seeming silly now, but you never know – and climbed out of the cab. Rick got out, too, walked up to the bike and said, “Nice Softail.”

Ellen said, “They could talk like this all day,” and the woman, about Ellen’s age, took the backpacks and put them in the Harley’s saddlebags saying, “Boys and their toys.”

The guy told Rick he could get him a deal on a bike and Rick said they’d talk about that next time. The woman handed Ellen a FedEx envelope.

Driving away, Rick said to Ellen, “You met her online?”

“Website for Moms with kids in the military. Her son joined up two months ago, he’s going to Iraq next week.” Ellen pulled the twenty grand in cash out of the envelope, four bundles, 250 twenties in each. The backpacks were full of ecstasy tabs, 2000 in each. The biker and his buddies would sell them in Detroit and Ann Arbour and Lansing for twenty bucks a pop.

Then she said, “How long till Saginaw?”


THE END
Posted by John McFetridge at 5:27 PM 7 comments:

My good buddy Michel Basilieres has updated my website, added the short fiction and even a few audio stories I recorded (flash fiction - 3-5 minutes each).

He can do the same for you, for a small fee. I think it really helped having a fellow writer design the webpage.

It's here: http://johnmcfetridge.ca/
Posted by John McFetridge at 1:47 PM 1 comment: