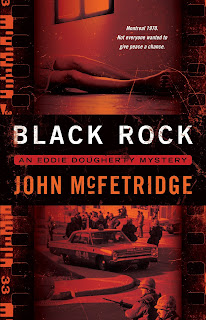 This will be the cover of my new novel which will be published by ECW Press in the spring of 2014.

The novel follows a young Montreal cop, Eddie Dougherty, in 1970. Dougherty has been on the force less than three years and already seen a lot of action - a bomb explodes at the Montreal Stock Exchange, five bombs explode at peoples' homes in Werstmount on the same night, bombs explode at McGill University and City Hall and federal government buildings, armed robberies, a one-day police strike and in October two men are kidnapped. One is murdered. All this really happened.

And at the same this was going on a man was murdering young women in Montreal. The police knew the same man had killed three women by October 1970 and they were expecting him to kill again. This also really happened.

Posted by John McFetridge at 9:22 AM 3 comments: