The flash fiction gang (Patti Abbott, Gerald So and Aldo Calcagno) are running another Flash Fiction Challenge, this time it's called, Wal-Mart: I Love You and my contribution is up on Do Some Damage, along with stories from Steve Weddle and Jay Stringer.

The People of Wal-Mart website was the inspiration, and I certainly used it for my story.
Posted by John McFetridge at 9:30 AM No comments:

On Thursday, November 12th I was very pleased to be a part of the ECW Press-Fine Print Fall Lit Party in Toronto.

My excellent editor, Michael Holmes, introduced the five writers and we each read a little from our latest works.

Richard Rosenbaum read his introduction from the anthology he edited, Can'tLit: Fearless Fiction from Broken Pencil Magazine which was great. He said out loud all those things we think about boring, conservative Canadian literature, the kind of stuff that pretends to be deep but really just reinforces the soft liberal world view of middle-class Canadians.

Damian Rogers read poems from her collection, Paper Radio. In his introduction Michael said that sometimes as writers grow older they can be embarrassed about their earlier writing (sometimes!?! the best thing that can happen to a young writer is not getting published) but that's not something Damian will ever have to worry about, and based on the poems she read, he's right. A poem about a roller rink in Windsor? Great stuff.

Mark Sinnett read from his novel, The Carnivores (which I bought after the reading), a great scene that took place during the buildup to Hurricane Hazel which hit Toronto in 1954. It was form the point of view of a young cop working that night and while I liked everything he read, his description of people on the roof of the Gladstone Hotel thowing beer bottles into the river flowing down Queen Street, and, "The fact that instead of smashing they simply bobbed west seemed to strike them as miraculous," sold me. I'm only halfway through the book and it is terrific.

The final reader of the evening was Sky Gilbert. He read a few poems from his latest collection, A Nice Place to Visit. Sky and I have some very different memories of Costa Rica. His poems were funny - laugh out loud funny - and then heartbreaking. A real pro.

I decided not to read from Swap and instead read an entire short story that will be in Driven Magazine later this month. I said in my introduction that I really like Driven, it's a glossy "men's magazine" that usually has a car or a celebrity on the cover that also has fiction. Of course, as I said, it usually has fiction from a big-name, award winning, bestselling author. So, I was thrilled when the editor called me and asked me if I could write a story for the mag. After I said sure, he admitted that they had a big-name, award winning, bestselling author lined up but he dropped out at the last minute, so could I write it over the weekend? Um, ah, yeah, sure. Then he said, "Oh, and could you call it Santa in a Red Dress?"

JT had been with the Saints of Hell going on two years, since almost the day he got back from Afghanistan, moving up from hangaround to prospect, still doing the shit work till he could get his patch. Like this: driving two days to Moncton to meet a guy who’d picked up 80 kilos of coke offshore.

Just before dawn, the freighter Sharon David, carrying low-sulphur coal from Maracaibo, Venezuela, to Sydney, Nova Scotia, passed by a mile off the coast, and one of the Filipino crew members tossed an oil drum overboard. At sun-up, a lobster fisherman named Jerry McNeil and his brother-in-law followed the GPS signal to the drum and pulled it onboard.

They had the drum open and the coke in three hockey bags before they even got back to shore. Later that day, Jerry drove almost four hours from Port Dufferin to the Magnetic Hill Motel in Moncton, parked his pickup in front of room number six and went to the coffee shop. Ten minutes later, JT came out of room number nine, took the hockey bags, 60 pounds apiece, and left a backpack with 40 grand in cash—enough to get Jerry through one more season, maybe even another, the price of lobsters didn’t go down as much as the price of fuel goes up.

JT drove back to Toronto, 15 hours in a brand-new Camaro, 300 horsepower and a Boston Acoustics stereo. On the Trans-Can through New Brunswick he saw a few signs for the US border: twelve miles, nine miles, always so close, and he thought how the coke he was carrying would bring almost twice as much wholesale in Canada, over 40 grand a kilo, because the market was so tightly controlled. Of course, the retail price in Canada was less than in the US, maybe 50 bucks a gram instead of 70 or 75, because the Saints sold to anybody and let them fight it out on the street. But that wasn’t his problem.

Getting the patch, that was his problem. Once JT had that, he’d never have to touch the product again...
Posted by John McFetridge at 2:07 PM 3 comments:

What a Great Idea!

An article in the Toronto Star today told the story of Catherine Raine and her mission to visit - and write about on her blog - every one of the 99 branches of the city of Toronto Public Library system.

The article is here and Catherine's blog is here. It's really good.

Now, Toronto has all the problems of any big city but the library system is fantastic. My family and I use the library all the time. Our local is Beaches Branch: 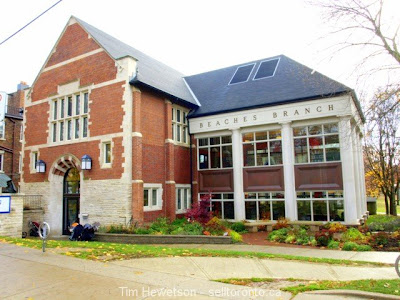 The building was renovated a few years ago and it's terrific, right on Kew Gardens Park, a great place to do some research or just sit and read a book.

But the thing that makes the Toronto Library system so good is that I can go online and order any book (or CD or DVD) in the whole system and have it delivered to my local branch.

I grew up in a small, mostly english town in Quebec called Greenfield Park and the library was an old house on Chruchill Street. It had narrow, rickety stairs and the science fiction books I loved were shelved in what was the attic. Isaac Asimov should know how many fears I had to overcome to go get those books by myself.

Now, Greenfield Park has been incorporated into the city of Longueil and has a very nice library branch. It's still on Churchill, across the street from the old haunted house.

So, what's library system in your town like?
Posted by John McFetridge at 2:06 PM 247 comments:

Two Readings in One Week

On Tuesday, November 10th, I'll be at the Princess Theatre in Waterloo at 7:00 pm as the opening act for Robert Rotenberg and my pal, international bestseller, Linwood Barclay.

Robert Rotenberg is a good guy, too, and his first novel Old City Hall received some great reviews.

Tickets are ten bucks but you can get in free if you buy Linwood's new book, Fear the Worst.

The event is being put on by Words Worth Books in Waterloo and they've put up a good website with info here.


Then on Thursday, November 12th, I'm very happy to be part of the ECW Press Fall Lit Party. 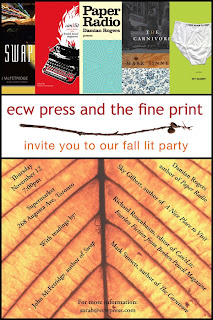 It's at Supermarket, 268 Augusta Avenue (in the heart of Kensington Market) and starts at 7:30.