Everybody Knows - the paperback

I have a post up at the Do Some Damage blog to day about Everybody Knows This Is Nowhere's roundabout trip to paperback - which comes out this week.

And I want to thank everyone for all their support for that book, and for all my books. You're all fantastic.

Posted by John McFetridge at 12:30 PM No comments: 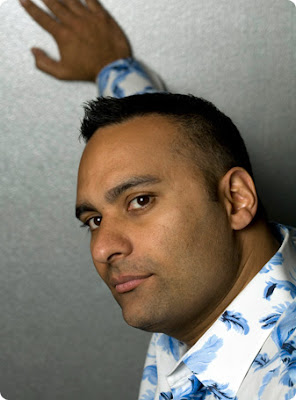 So, my co-writer Dannis Koromilas and I are adapting Dirty Sweet into a screenplay.

So far so good.

We don't want to get too far ahead of ourselves, but it's good to be optimistic (at least for me, makes those days where we have to cut out so many of my beautifully crafted scenes easier) so we're talking about our ideal cast.

And I'd like to know if people think that guy - Russell Peters - would make a good Vince.

If the movie gets made it's likely Russell will be in it somwhere. In Hollywoodspeak, Dannis has a "relationship" with him.

One thing we really noticed breaking down the novel for the screenplay is that Vince doesn't do all that much, he mostly watches other people do stuff. He reacts.

When you watch Russell perform, a lot of his act is interacting with the audience - reacting to what people say. He's very good at it. He's one of those guys who can express an awful lot with very few words and a raised eyebrow.

Labels: dirty sweet, russell peters, screenplay
Newer Posts Older Posts Home
Subscribe to: Posts (Atom)
In just three novels McFetridge has demonstrated gifts that put him in Elmore Leonard territory as a writer, and make Toronto as gritty and fascinating as Leonard's Detroit... (McFetridge) is a class act, and he's creating fictional classics -- maybe even that great urban literature of Toronto the critics now and then long for.
-- The London Free Press