Must Avoid Panic in the Face of Bomb Terrorism

On September 29th 1969 a bomb exploded at the house of Montreal Mayor Jean Drapeau. No one was injured but, as the newspaper report said, “The pre-dawn explosion which shook the neighbourhood… forced the mayor’s wife and son into a cold drizzle. They didn’t even have time to put on their shoes.”

This was the 10th bomb of 1969 to explode. Dozens of other bombs were defused by Sgt. Robert Coté and the bomb squad.

The Premiere of Quebec at the time, Jean-Jacques Bertrand, said the people of Quebec must avoid panic in the face of bomb terrorism. “The police forces are doing their job and it is our hope and expectation that those responsible for such outrages will be brought before the courts and the law will take its course.” Then he repeated the claim made by pretty much every official at the time that the bombs were being planted by “foreign nationals” who received “training in Cuba.” Then he made a joke, apologizing for calling the terrorists “beardos,” and saying, “Some of best friends have beards.”

Four days later the body of 20 year old Shirley Audette was found behind the apartment building she lived in on Dorchester Boulevard (now Boulevard René Lévesque) near Guy. She had been strangled. In the investigation it was discovered that she had been treated at a psychiatric hospital (the Douglas in Verdun) and was five weeks pregnant. She was the first victim of the “Vampire Killer.”

Four days after that the Montreal police went on a strike which lasted 16 hours and resulted in one death and 108 arrests. The strike was motivated by difficult working conditions caused by disarming so many separatist-planted bombs and patrolling frequent protests. The Montreal police also wanted to be paid the same as police in Toronto.

As the riot was ongoing, the provincial government passed an emergency law and forced the police back to work. The army was also called in but by the time the 22nd Regiment (known as the “Vandoos”) arrived at dawn the riot was over.

The CBC archive has some very good news footage from the day.

A couple months before Shirley Audette was killed, the Manson Family murders had taken place in California and the idea of “drug-crazed hippie-murders” was being talked about a lot.

The Vampire Killer’s second murder took place a few weeks later on November 23rd, a few days before the Canadian football championship game, the Grey Cup, was played in Montreal. The entire police force had spent the weeks before the game preparing for the possibility of a terrorist attack.

A lot of what happens in Black Rock is based on actual events. The first couple of events mentioned in the book are the riot at Sir George Williams University (in the Hall building, where I had a lot of classes in the 80s) and the bomb at the stock exchange. 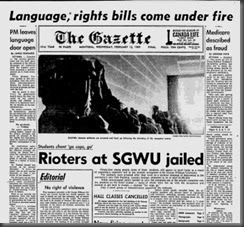 Wikipedia describes the events at Sir George like this:

Most of the occupation was quite peaceful: the police were not involved, and negotiations continued. Some claim that the computer lab was not damaged, except for several million computer punched cards that were sent fluttering to the street below; but a Canadian Broadcast Corporation documentary shows smashed computer tape drives and extensive fire damage. The damage was listed in millions of dollars. It is unknown who caused the fire. The police accused the occupiers of the damages, while the occupiers accused the police of setting the fire as an easy way to get all the students out of the room without physically entering it. Other students also claim that they saw police locking doors and exits that were normally open and police confiscated fire axes from students the day before the fire was set.

The occupation continued until February 11 when negotiations broke down and riot police were called in. A fire broke out in the computer lab, forcing the occupiers out of the building. 97 of them were arrested. The computer lab was destroyed, resulting in over $2 million in damage. Windows were broken and computer tapes and punched cards tossed onto the street below. The charges against most of the rioters were eventually dismissed.

Two days later a bomb went off at the Montreal Stock Exchange in Place Victoria. 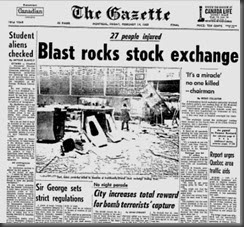 Some people described it as a “miracle” that no one was killed. 27 people were hospitalized.

The New York Exchange had closed early that day so quite a few people from the Montreal exchange were sent home, among them the “phone boys” whose work station – a row of desks along the wall – was destroyed in the blast.

What really surprised me about the stock exchange bombing was that although a huge hole was blown in the side of the building and there was an estimated two million dollars of damage to the trading floor and offices, the building was open again the next day.

Busy days for the police on the front lines, including Black Rock’s, Eddie Dougherty.