This story was originally published in Demolition Magazine online and now I've made it available through Smashwords. 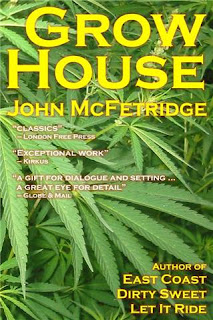 It can be read online or downloaded for Kindle, Sony e-reader and a lot more devices, just click here.

The description I used at Smashwords is:

Stand-off in a suburban grow op. Freddie is robbing the place, Victor has come to kill him, Steve is caught in the middle and Holly is looking for a quiet evening at home. Any house in any neighbourhood could be a grow house...

Steve Barrett had been back from Afghanistan two weeks when he got back to stealing cars, this one a brand new BMW X5, leather interior, V8. What he did was, he stood around the parking lot of the Vaughn Mills Mall in north Toronto until some woman pulled in driving it and he followed her inside. Then he gave a couple of teenagers fifty bucks to steal her purse and while she was giving the mall security guard shit for half an hour, Steve drove the car to a garage on Dufferin owned by a biker named Danny Mac who gave him ten grand cash.
Posted by John McFetridge at 2:30 PM 2 comments:

Or so I've heard. Too bad, this Saturday was sceduled to be an episode I co-wrote with Dannis Koromilas.

Still, it looks like there will be a Season Two on CTV next year.
Posted by John McFetridge at 10:55 PM 7 comments: