The Moon and the Stars and the Sun

The Star said the book has, “just the right balance of grit, humour and rock’n’roll knowledge,” and that the, “story of the middle-aged guys in The High taking a deep dive into the world of shylocks, bikers, murder and much more entertaining stuff that seems to be just sleazy for its own sake.” Well, I think there are a few reasons for the sleaziness, but fair enough. Entertaining, that’s the part I like.


And the Sun said, “There's still plenty of sex, drugs and rock and roll in this post-middle-aged world -- the riffs alone on the groups and music of the day will appeal to a whole lot of readers -- and there's even some love and romance, albeit of hard-bitten sorts.” It also said, “McFetridge is -- or should be -- a star in the world of crime fiction.” And all I can say to that is, thank you.


When looking for a title for this blog post I realized that for all the rock’n’roll talk in Tumblin’ Dice there’s very little mention of The Beatles. Well, in the book the band The High are about my age so they were around twelve years old when The Beatles broke up and stopped putting out records. Like me, the first records they bought were by The Rolling Stones, Alice Cooper and Aerosmith (I think the guys in The High were too cool to start off with a K Tel record).

And now that I think about it, Instant Karma would make a really good title for a novel...

Posted by John McFetridge at 9:45 AM 4 comments:

Reviews are starting to come in for Tumblin' Dice and so far they're very good.


The Quill and Quire review is now online here.

There's also a good review in Publisher's Weekly that says:

Things start accelerating from the opening line, which sets the tone, engages interest perfectly, and could have come from Elmore Leonard. "The High had been back together and on the road for a couple of months playing mostly casinos when the lead singer, Cliff Moore, got the idea to start robbing them." And the avalanching pace keeps going as the band's efforts to supplement their income illegally leads to violent complications. The scheme takes a personal turn when the High decide to take revenge on a casino owner, Frank Kloss, who had ripped them off on their first contract, and continued to take advantage of them for a decade of representation. Like Leonard, McFetridge is able to convincingly portray flawed figures on both sides of the law.

It can't be all good, of course, and this week Tumblin' Dice also got a couple of very negative reviews, but I'm not man enough to post links to those.

I also did a Q&A with OpenBook Toronto which is now online here. Some good questions including one about the challenges and pleasures of working with characters from previous books.
Posted by John McFetridge at 12:51 PM 5 comments:

And we have lift-off 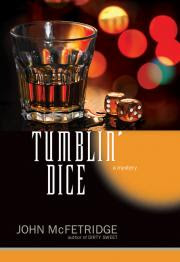 Today is the official launch date for Tumblin' Dice.

So far, my friends have said good things about the book and the review in Quill and Quire (Canada's Magazine of Book News and Reviews) was starred and said that each of the, "...colourful characters takes huge chances, frequently hoping for an equally huge payoff. The only one not taking a chance on Tumblin' Dice is the reader," which is very nice of them.

The publisher, ECW has put the first chapter online here.

The books is available in hardcover and e-book in all the usual places. In fact, the US distributor, IPG, have had 5000 of their books pulled from Kindle sales in the US but for some reason my books were not among them.

If you by the book or take it out of the library or borrow it from a friend or find it on the floor of a bus I hope you like it.

Thanks.
Posted by John McFetridge at 9:10 AM 10 comments:

Labels: Tumblin' Dice
Newer Posts Older Posts Home
Subscribe to: Posts (Atom)
In just three novels McFetridge has demonstrated gifts that put him in Elmore Leonard territory as a writer, and make Toronto as gritty and fascinating as Leonard's Detroit... (McFetridge) is a class act, and he's creating fictional classics -- maybe even that great urban literature of Toronto the critics now and then long for.
-- The London Free Press