Santa in a Red Dress - Live!

ECW Press recorded the readings at their Lit Party a couple of weeks ago and here's me reading the short story, Santa in a Red Dress that's in the December issue of Driven Magazine.

I've done a few of these readings the last few years so you'd think I'd be getting better at it, but no. Still just stare at the page and read.

The other ECW authors who read were really good and you can see them all here:

http://www.youtube.com/user/ecwpress
Posted by John McFetridge at 11:43 AM 7 comments:

He's right, but does that matter?

This is the kind of story that makes the background for my books. While sentencing a man convicted of running a marijuana grow op, the judge rejected a federal prosecutor's argument that a jail term was necessary to discourage people from getting involved in the drug trade.

"What's your basis for saying that?" the judge pressed. "Because nobody has been deterred. People have been going to jail for drug offences for – for a couple of generations now and the drug – the drug plague is worse than it ever was."

Allen questioned why, when a form of sentencing "doesn't work," he would try it again and again.

"Isn't that a form of insanity?" he asked.

And then the judge said what I've been writing about for three books now:

All society is really doing by prohibiting the production and consumption of marijuana is "giving the Hells Angels several billion dollars worth of income every year," Allen said.

Of course, I try to just present the criminal world as I see it. I try hard not to moralize or make my books too didactic. I have no answers to the "drug plague" as the judge called it, but if he's right about this part:

... the chances of a Dutch teen smoking marijuana – which is available at their local coffee shop – are substantially lower than the likelihood of an American teenager using the drug, he said.

A few years ago a teenager told me that he and his friends smoked dope because it was easier to get for them than beer. This kid claimed it was because stores that sold beer and alcohol (privately owned or government owned - I've lived in places with each system and there's little difference) didn't want to risk the fine and the criminal charge for selling to them but the drug dealer they bought from was already committing a criminal offense, so he didn't care.

To me there's no doubt that the drug trade supplies organized crime with a huge amount of capital and like all capitalists they reinvest that money and try to 'grow' their business into other areas.

And for now, it's all material for me.

And there's no shortage of material.

The Toronto Star article about the judge is here.
Posted by John McFetridge at 1:00 PM 4 comments:

Santa in a Red Dress

There's also a really good interview with Stephen King about his new novel Under the Dome and a whole bunch of cool gift ideas. 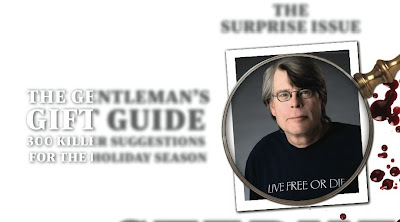 The whole issue is available as a .pdf here.
Posted by John McFetridge at 5:19 PM 3 comments:

This was sent to me by my good friend, Adrian McKinty.* 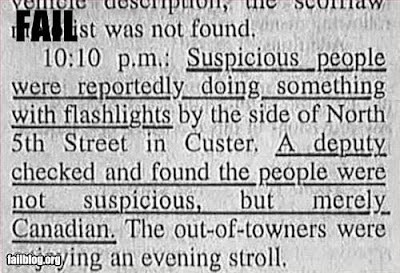 * I've never atually met Adrian, but I follow his very well-written, thought-provoking and entertainingly opinionated blog and I highly recommend his novels, the most recent of which is Fifty Grand.

Apparently Billy Gibbons of ZZ Top gives people his business card that has only his name and, "Friend of Eric Clapton," printed on it. I was thinking I'd like cards with my name and, "Friend of ___," but thanks to this interweb thing it would have to list an awful lot of people, suspicious or not.
Posted by John McFetridge at 9:51 AM 5 comments:

Labels: suspicious canadians
Newer Posts Older Posts Home
Subscribe to: Posts (Atom)
In just three novels McFetridge has demonstrated gifts that put him in Elmore Leonard territory as a writer, and make Toronto as gritty and fascinating as Leonard's Detroit... (McFetridge) is a class act, and he's creating fictional classics -- maybe even that great urban literature of Toronto the critics now and then long for.
-- The London Free Press