For the past few months I've been working on a new novel which right now I'm calling Black Rock. It's set in Montreal in 1970, the year of the "October Crisis" and is about a young, almost-rookie cop who gets involved in the hunt for a serial killer.

I was planning to write a novel about the value of a single life (if that doesn't sound too pretentious, which I know it does) and set it against the backdrop of the kidnapping and murder of Quebec politician Pierre Laporte. One of the things I've heard a lot about the period of terrorism we lived through in Montreal in the late 60s and into 1970 was that "only eight" people were killed by terrorists and I started to wonder, well, isn't one too many?

When I started to look into this idea of the value of a life I thought about the memorial on the Montreal side of the Victoria Bridge commemorating the deaths of 6000 Irish immigrants to Canada during the famine. 6000, that’s a lot, surely no one would ever say, “only six thousand,” about that.

And yet, I’ve driven by that monument thousands of times in my life and never stopped to read the inscription and never really knew the story behind it. It’s official name is The Irish Commemorative Stone and Wikipedia says it’s sometimes called the “Ship Fever Monument” or the “Boulder Stone” but I’ve never heard it called anything but the “Black Rock.”

The story I’ve always heard about the Black Rock was that Irish workers digging out the piers for the Victoria Bridge sometime between 1854 and 1859 discovered a mass grave – the coffins of 6000 Irish immigrants who had died of typhoid on the ships crossing the Atlantic (or died under quarantine in the ‘fever sheds’) in 1847.

And it’s only now that I’m realizing between the typhus epidemic and the discovery of the mass grave less than ten years have passed. So, in less than a decade the deaths of 6000 people have been buried and forgotten. No marker, nothing.

The story goes that when the workers dug up the mass grave they also dug up the big rock and wanted to use it as a memorial. I have a feeling there was some discussion about not losing any work time to do it, but let’s call that a hunch.

The inscription on the rock reads:

"To Preserve from Desecration the Remains of 6000 Immigrants Who died of Ship Fever A.D. 1847-48 This Stone is erected by the Workmen of Messrs. Peto, Brassey and Betts Employed in the Construction of the Victoria Bridge A.D. 1859.”

So, the Black Rock fits with my ideas about the value of a single life, but I am a little wary about trying to attach myself to so much history. And the murders of the three women. When does exploitation start, exactly?

Well, one writer is using historical events and not exploiting them, but writing fantastic books, is my friend Adrian McKinty. His latest published novel, The Cold Cold Ground, takes place in Northern Ireland in 1981 and there’s really nothing I can add to the long, long list of great reviews the book has received. The weird thing is it’s easier to get the e-book or the audiobook in north America as no US publisher has picked it up.

I predict that will change with either the second or third book in the series.

Dirty Sweet and Everybody Knows This Is Nowhere are now available as audiobooks from Audible.com.

All four are narrated by William Dufris and I think he does a fantastic job.

And there was a review of Tumblin' Dice in the National Post today by Sarah Weinman which said very nice things. My favourite part is: "Each of John McFetridge’s three previous novels have a rhythm to them, mixing taut dialogue, spare description and a dark sensibility with the cool calm of a master bass player."

It's funny she mentions the bass. I bought my first bass, a Hagstrom, in about 1978 but when I joined the band Smiley's People in 1985 I switched to guitar (strictly rhythm, as they say) and the bass was played by Michel Basilières, whose fantastic novel Black Bird won the Amazon/Books in Canada Best First Novel Award.

The real guitar player in Smiley's People was Clifford Schwartz and here's a clip of him playing with Cirque du Soliel: 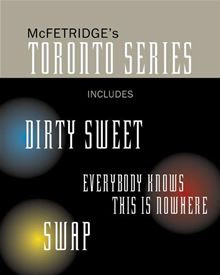 ECW Press has issued my first three novels as a single ebook for less than ten bucks.

It's available for the Kobo here, and I hope for other formats soon.

Labels: bundle, toronto series
Newer Posts Older Posts Home
Subscribe to: Posts (Atom)
In just three novels McFetridge has demonstrated gifts that put him in Elmore Leonard territory as a writer, and make Toronto as gritty and fascinating as Leonard's Detroit... (McFetridge) is a class act, and he's creating fictional classics -- maybe even that great urban literature of Toronto the critics now and then long for.
-- The London Free Press