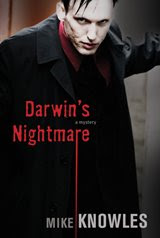 A while ago I was asked to contribute a blurb to a first novel called Darwin's Nightmare. Cool title, I thought, and then when I read it, cool book.

I offered the blurb, "Like Parker on meth," but the publisher wanted something else so I gave them, "Relentless. Only the most ruthless survive. A fantastic new hard-boiled voice. Anti-hero Wilson is pitch-perfect."

“The evolution of the gangster novel takes a step forward with 'Darwin's Nightmare.' Mike Knowles' hardboiled spin on Hamilton's underworld is written with a tireless and controlled intensity.”

“Darwin's Nightmare is an angry charge into a bloody underworld free-for-all where a fighter's survival is earned by what he'll do after the bullet hits him. Mike Knowles is a strong new voice in crime fiction.”

Or the Hamilton Spectator:

“A debut novel with an assured, strongly focused voice and hard-boiled writing that reminds you of Mickey Spillane. Darwin's Nightmare announces a new and serious mystery writer on the Canadian scene...The pace of the story kept me turning pages. The violence is raw, the energy of the writing is addictive, and the story reveals life as it unravels from the wrong side of the gun...Darwin's Nightmare is a debut novel not to be missed.”

Or, the bookitself. As it says on the back:

"Wilson spent his entire life under the radar. Few people knew who he was and even less knew how to find him. Only two people even knew what he really did. He worked jobs for one very bad man. Illegal jobs no one could ever know about. Wilson was invisible until the day he crossed the line and risked everything to save the last connection to humanity he had. One day changed everything. Wilson saved his friends and earned the hatred of a vengeful mob boss, a man who claimed he was Charles Darwin’s worst nightmare.

"Wilson survived his transgression and went even deeper into the underworld of Hamilton becoming a ghost in the city – an unknown to almost everyone until he was paid back for his one good deed. It started with a simple job. Steal a bag from the airport and hand it off. No one said what was in the bag, and no one mentioned who the real owners were or what they would do to get it back. One bag sets into motion a violent chain of events from which no one will escape untouched. Wilson learns that no one forgets, no one gets away clean, and no good deed goes unpunished."

Looks like we're going with swap as the title for the next book.

This is the first pass at the cover. 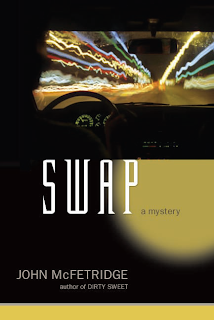 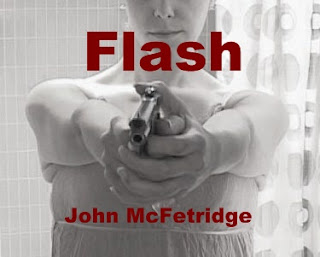 I've collected all the flash fiction, short stories and even a few interviews I've done online and put them together in a free e-book over on my webpage.
Posted by John McFetridge at 11:32 AM 58 comments:

Labels: e-books, free
Newer Posts Older Posts Home
Subscribe to: Posts (Atom)
In just three novels McFetridge has demonstrated gifts that put him in Elmore Leonard territory as a writer, and make Toronto as gritty and fascinating as Leonard's Detroit... (McFetridge) is a class act, and he's creating fictional classics -- maybe even that great urban literature of Toronto the critics now and then long for.
-- The London Free Press