Saturday, November 27th, I'll be one of the guests at the Oshawa Public Library (McLaughlin Branch) DarkLit Fest of Durham.

It's a full day of events. The schedule is here.

I'll be on the, "Getting Away With Murder: Writing Chilling Crime Fiction" panel along with Jon Evans and Howard Shrier, moderated by Brent Laporte at 1:45.

Should be very interesting.
Posted by John McFetridge at 5:46 PM 2 comments: 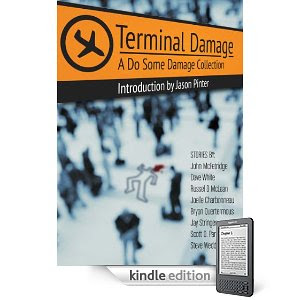 Every Wednesday I blog on the Do Some Damage website and a while ago one of the other folks there suggested we put out a collection of short stories.

Because we were all very busy and barely keeping up with the blogging we decided to make it a little tougher on ourselves and link up the stories. So, every story has a little something to do with JFK Airport.

For example, my story, The Gladiator Resort, starts:

The plane was two hours late landing at San Jose, Costa Rica, JT saying they were delayed at JFK, place was locked down, “Somebody probably tried to bring shampoo on the plane.”

If you're familiar with my books you probably recognize JT (he also shows up in my story in the Discount Noir anthology) and the Gladiator Resort was being planned way back in Everybody Knows This Is Nowhere.

So now the Terminal Damage anthology is available for Kindle here.
Posted by John McFetridge at 1:31 PM No comments:

The Wreck of the Edmund Fitzgerald

This moring on the radio I heard that today is the 35th anniversary of the sinking of the Edmund Fitzgerald. Of course, like most people my age I first heard about this tragedy from Gordon Lightfoot and at the time I really had no idea how good his song is.

I did a little research into laker freighters for my novel, Everybody Knows This Is Nowhere, because I walk my dog along the waterfront in Toronto and saw quite a few of the big boats and I thought that might be a good place for a marijuana grow-op. The old brewery in Barrie had just been discovered to be a huge grow-op and I figured any big, empty space would do. And then I moved on to the next book and pretty much forgot about laker freighters. I still see them when I'm walking my dog and they still seem really cool.

And after mentioning the anniversary, the radio played Gordon Lightfoot's song, The Wreck of the Edmud Fitzgerald, and I really listened to it for the first time and realized what powerful storytelling it is. All those things they try to teach us in writing classes about using the fewest words to paint the biggest picture, to try and get the emotions across and not just the details.

"Concluding some terms with a couple of steel firms
When they left fully loaded for Cleveland..."

"When supper time came the old cook came on deck
Saying fellows it's too rough to feed ya
At 7PM a main hatchway caved in
He said fellas it's been good to know ya."

"Does anyone know where the love of God goes
When the waves turn the minutes to hours..."

I've read novels that used page after page, hundreds, thousands of words to get that same emotion across. There are a lot of lessons for writers in the simple, direct, personal storytelling of this song and maybe the most important one is the respect that Lightfoot shows for the men who lost their lives. That respect is something we talk about a lot in crime fiction and I need to remind myself about often.