St. Famous by Jonathan Dee, though I could have picked any Jonathan Dee, I think. I have no idea why this incredibly talented, insightful writer isn't a bestseller every time out, but there you go. 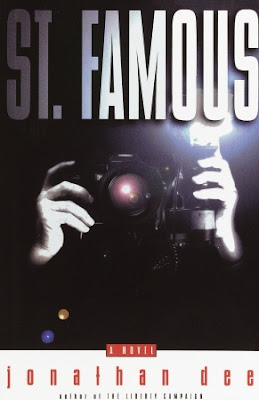 Here's what Publishers Weekly had to say (even though they didn't get it exactly right) hwne the book was published in 1995:

"Dee explores America's obsession with the cults of victimhood and fame in the aftermath of a race riot in New York City. Paul Soloway is a struggling writer who's been working on his first novel for 10 years when the acquittal of a white man who has shot a black child touches off a riot in Harlem. Paul ends up being abducted and held hostage by Victor Hartley, a normally respectable young black man brought to the boiling point by a long and random chain of circumstance. The novel opens as Paul, who has suffered severe physical injuries during his time as a hostage, is released from the hospital and into the ensuing media feeding frenzy. Eventually, he is persuaded to write a book about his experience in the riot, which is presented to the reader largely through excerpts from the work in progress. Meanwhile, his abductor becomes a hero in the black community and, with the help of a high-profile lawyer, starts his own media campaign. The gulf that separates Paul and Victor is only increased by their different attempts to make sense of their private experience in the public realm, leading to a climax that sacrifices credibility to make a polemical point. Dee is certainly a skilled writer, one who pays careful attention to both the internal and external details that give his characters' actions substance and weight. But while his portrayal of America's racial divide is acute and his characters well drawn, ultimately both Paul and Victor emerge as selfish and naive, and much of what they learn about the power of the media and the distortions of public image over the course of the novel seems distressingly obvious."

Okay, I guess maybe (maybe) the characters might be a little naive and maybe even a little selfish but I thought that made them real people. I didn't find the point polemic or sacrificing credibility (in fact, it was frustratingly real and refused to give in to the temptation of a happy ending) or what the characters learned to be "distressingly obvious." The ideas in this book will have only become more poignant as the "power of the media and the distortions of public image," have become even more pronounced.

I'd also put Dee's Palladio on your TBR lists. It has more to say about the advertising industry than ten years of Mad Men episodes.
Posted by John McFetridge at 9:00 PM

My sole Coe book was The Liberty Campaign which I very much admired. Thanks, JOHN.