The Bridge in the paper 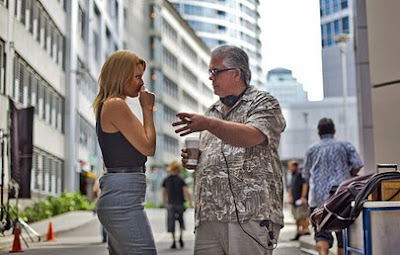 This morning I woke up to see my boss on the front page of the Toronto Star. That can be a good thing or a bad thing. In this case it was very good.

Craig Bromell is the Executive Producer and Creative Consultant on the TV show, The Bridge. It's really his show, based on his experiences as a Toronto cop and then as head of the police union.

The article is straitforward enough, but then the comments start. Right away you can see how polarizing a guy Craig was in Toronto. Great fodder for a TV show.

In the pilot episode the character based on Craig, Frank Leo, says, "All I ever wanted to be was a cop." When he sees the way cops are treated by the brass and the politicians, the way cops are always guilty until proven innocent and the way their own bosses will sell out the cop on the street - the ones in the line of fire - for cheap political gain, it becomes too much for him and he gets elected pesident of the union.

At that point the brass go after him hard, one deputy chief telling him, "Whenever the public sees a corrupt, out of control cop, they'll see your face."

So now the guy who only ever wanted to be a good cop becomes the poster boy for bad cops.

Quite the internal conflict for a main character. Lots of emotional stuff to deal with. It's the kind of show that may take a few episodes to really find its footing so it's great that CTV and CBS are fully committed.

The Toronto Star article is here.
Posted by John McFetridge at 10:42 AM