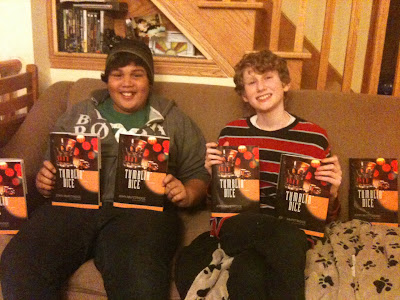 My friend Adrian McKinty has started something called George McFly Day. It's the day when the author copies of a book arrive at your house. Well, today is George McFly Day at my house as my copies of Tumblin' Dice arrived.

ECW Press have done their usual excellent job with the book and together with the previous three it's starting to look like a real series.

This will also be the first book in ECW's, "Buy a book, get the ebook free," promotion.

Oh, and the about the book runs like this:

The High, a band with a few hit songs in the late 1970s, have reunited to play the nostalgia circuit at casinos. But for bassist Barry and lead singer Cliff, this tour promises to be unforgettable and even more worthwhile than ever. In this fourth installment of the Toronto series, these two band members turn the tables on the gritty underworld of casinos, as they rob the loan sharks and drug dealers who work at every stop of the tour. After finding their old manager who had swindled millions from them years ago, Barry and Cliff decide to go for the big score and get it all back — and more. But when the Saints of Hell, the notoriously dangerous motorcycle gang, get involved, all bets are off.

As usual with my books there are probably too many characters, too many sub-plots and not enough mystery but as my son Douglas (on the right in photo above said, "You sure use the f-word a lot," so there's that.
Posted by John McFetridge at 8:38 PM

Congratulations, John. I'm glad to see that you are following Adrian's tradition. Or maybe actually making it into a tradition.

I've got Swap ahead of me, but I will definitely be getting this one as well.

Mazel tov! Does the book still include:

"Cliff started to follow, felt a hand on his arm and looked around to see two very hot chicks, had to be teenagers, but maybe legal, looked exactly the same; long blonde hair, tight jeans, low cut tees, like twins, same serious look on their faces and he said, `Hey ladies, looking for some fun?'

"One of the girls said, `No, we're looking for our Mom, she was talking to you before.'"

Congratulations. We are looking forward to reading Tumblin' Dice !

And yes, Peter, that's still in the book. And Ritchie's follow-up, "At least they're not looking for their grandma." This book is all about the way people work in groups, especially when they're thrown together and over time some change and adapt and some don't. There's the guys in the band, the cops, the mobsters and so on. They don't always get along...

Thanks Patty! There won't be an official launch party, but we should get together sometime soon.

Oustanding, John! Can't wait to get this, been so looking forward to it.

"too many characters, too many sub-plots and not enough mystery"

All reasons why I love your books

I just bought a copy through Book Depository.

I have to add that these kids are a bit older than Mckinty's, which means they must be extraordinarily gracious to put up with publicity stunts.

Yes, Seana, the kids are a little older than Adrian's, thirteen and almost twelve. I have a feeling this may be a short-lived tradition but it's fun while it lasts.

Someday one of them may even read one of the books. I wonder bow they'll feel, finding out what was going on in my head when I pushing them on swings and watching them play soccer?

John, Douglas' comments may cut deep, but believe me, he's fucking proud of you.

John, have you ever read my man Bill James? He has interesting things to say (and write) about how people work together or don't work together in groups.

The f-word is the thing I love most about your books - Doug is a pretty smart kid.