While doing a little research I came across this ad for apartment rentals in Montreal in 1970: 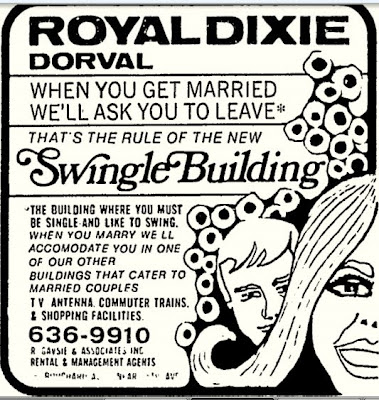 The building (which is still there but doesn't look very swinging on Google view) is near the airport and now I've discovered stories of wild parties with stewardesses (no one used the words "flight attendant") and the rumour that Xaviera Hollander (the Happy Hooker) lived there for a while, or maybe partied there or maybe worked there.

But what the ad really made me think of was Frank and Stick in Elmore Leonard's Swag and the apartment they lived in while pulling armed robberies around Detroit.﻿ 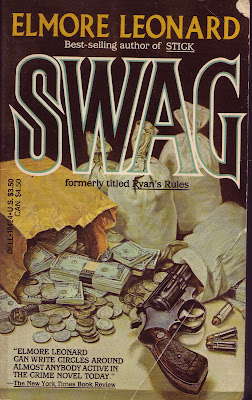 Swag wasn't the first Elmore Leonard novel I read but it was the first one that had characters that acted exactly like people I knew.

Posted by John McFetridge at 11:05 AM

Swag actually the first Elmore Leonard I read. And I liked it for pretty much the same reasons as you did.

I hadn't read a lot of crime fiction at the time but he was interviewed by the music journalist Charles Shaar Murray and E L came across well.

The ad really made me feel that the characters in Swag were universal - the 'junior executives' and the stewardesses and so on, and at the same time very specific to Detroit.

How I would love to see a movie verion of Swag set in the early 70s...

Criminy, they needed copy editors then, too. Or maybe they figured the swinging singles would be too zoned out to notice the dropped m in accomodate.
======================
Detectives Beyond Borders
"Because Murder Is More Fun Away From Home"
http://detectivesbeyondborders.blogspot.com

nice to see frank and stick together again
just coming from faron woody's funeral
what novel is that from?

Peter, I'm surprised they got 'commuter...'

Benny, the only Woody I can think of offhand is in "Freaky Deaky."

Maybe the Swingle Building was what the guys in Charles Willeford’s Shark-Infested Custard hoped their building would be.
==========================
Detectives Beyond Borders
"Because Murder Is More Fun Away From Home"
http://detectivesbeyondborders.blogspot.com

Swag is one of the great Leonard novels. Although all of his books are pretty great. I was glad to see it finally reprinted a couple years back. I think it was originally called Ryan's Rules or something. Either way, an excellent book.

I tend to mix my own mysteries with the supernatural, but Leonard remains a huge influence on my work.