Here’s the cover for the second Eddie Dougherty novel, A Little More Free: 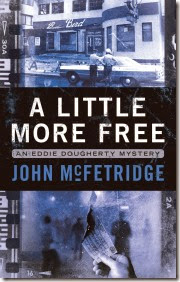 Montreal, Labour Day weekend, 1972. The city is getting ready to host the first game in the legendary Summit Series between Canada and the USSR. Three men set fire to a nightclub and Constable Eddie Dougherty witnesses the deaths of 37 people. The Museum of Fine Arts is robbed and two million dollars’ worth of paintings are stolen. Against the backdrop of these historic events, Dougherty discovers the body of a murdered young man on Mount Royal. As he tries to prove he has the stuff to become a detective, he is drawn into the world of American draft dodgers and deserters, class politics, and organized crime.

Posted by John McFetridge at 3:09 PM

Looking forward to it, John.

Nice cover. What street are we looking at (top)? Can't wait to have it my hands with a cup of tea :)

I like how they're sticking to a design theme for the series. Nice cover, and a hell of a book.

I managed to snare myself an advance copy of this, and it's absolutely terrific. Great cover, too.

Nice job of very naturally working so many events into the story without in the least seeming rushed, forced, or gimmicky.

And, as always, nice job naming the minor characters.

I have been enjoying your Eddie Dougherty books. I was stationed at Plattsburgh AFB from 1974-1980.

Nice cover. What street are we looking at (top)? Can't wait to have it my hands with a cup of tea :)


Please keep updating this blog, it's been too long. Great post! We adore this blog and This information is very good.

Thanks for sharing the blog so well and I hope you have something new for me to study.
FOOTBALL BETTING