What is it with novelists setting books in the years when they were around ten years old?

Stephen King has a new book out this week that starts in 2011 and the main character time travels back to 1958 - Stephen King was born in 1947.

Adrian McKinty has a new book coming out in January set in Northern Ireland in 1981 - Adrian was born in 1968. 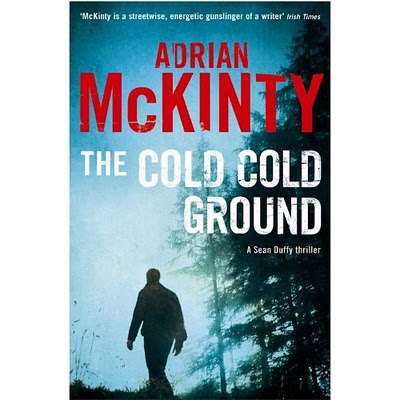 I like Stephen King's books and I expect I'll read this new one soon and like it well enough but I was lucky enough to read an advance copy of Adrian's, The Cold Cold Ground, and it is a fantastic book.

The back of the book description says:

There may be troubles ahead...Northern Ireland. Spring 1981. Hunger strikes. Riots. Power cuts. A homophobic serial killer with a penchant for opera. And a young woman's suicide that may yet turn out to be murder. On the surface, the events are unconnected, but then things - and people - aren't always what they seem. Detective Sergeant Duffy is the man tasked with trying to get to the bottom of it all. It's no easy job - especially when it turns out that one of the victims was involved in the IRA, but last seen discussing business with someone from the UVF. Add to that the fact that as a Catholic policemen, it doesn't matter which side he's on, because nobody trusts him - and Sergeant Duffy really is in a no-win situation. Fast-paced, evocative and brutal, "The Cold, Cold Ground" is a brilliant depiction of Belfast at the height of the Troubles - and a cop treading a thin, thin line.

I really hope there are more Sean Duffy books, the guy's a great character.
Posted by John McFetridge at 6:36 PM

A fine endoresment, from a trusted source. Really looking forward to CCG, King's new one, and Tumblin' Die, of course.

Appreciate the shout out mate

Yeah, it would be nice if this turns out to be the first of the Duffy trilogy or tetralogy or, er, saga.
======================
Detectives Beyond Borders
"Because Murder Is More Fun Away From Home"
http://www.detectivesbeyondborders.blogspot.com/