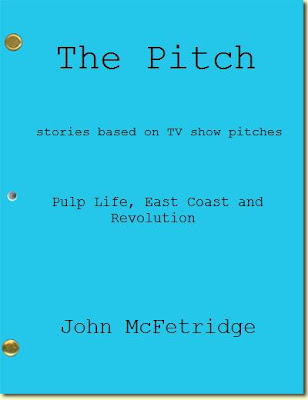 The cover pretty much says it all, but here's the Amazon description:

After working as a writer on the CBS/CTV cop drama, The Bridge, novelist John McFetridge (Dirty Sweet, Everybody Knows This Is Nowhere, Let It Ride) began pitching his own ideas for TV shows to American and Canadian networks. The four stories in The Pitch are based on pilot scripts written for three of these potential series; Pulp Life, a comedy-noir half-hour cable series about a crime novelist helping an ex-con write his memoir – and commit crimes; East Coast, a network-style police procedural about narcotics cops on the Maine-New Brunswick border and; Revolution, a spy story set in Montreal in 1968 with a KGB agent as the hero.

One of the two Pulp Life stories first appeared in the Do Some Damage anthology, Collateral Damage, and the story East Coast has been available from Smashwords for a while.

The Second Pulp Life story and Revolution have never appeared anywhere before.

I've had this idea for a while to write e-books as if they're TV series - a "season-long" story arc playing out over 6 or 13 "episodes" but each one also having a self-contained story. Maybe publishing the "episodes" once a month and then also making them available as single collection, like a TV series box set of DVDs.

If you're interested, you can find the book here.

And maybe you could let me know if you think there should be any more 'episodes' of any of the 'series.'
Posted by John McFetridge at 5:17 PM

Downloaded and moved to the top of the TBR pile. I have a couple of things I'd really like to read, but a seemingly endless home improvement project has me stalled on both writing and reading. This should be just the thing to get me jump started.

Going to check it out, and it is def an interesting concept, with potential. Will follow up after I read give it a read.

I just bought it!
======================
Detectives Beyond Borders
"Because Murder Is More Fun Away From Home
http://www.detectivesbeyondborders.blogspot.com/

Thanks guys, I appreciate it. I'm thinking of putting a poll on the blog asking people which series they'd like to see more of.

What do you think?

You're taking a poll to determine if you should take a poll.

Yes, that's right, Peter. First I had a long debate with myself over whether to have the poll asking about the poll.

Why, is this odd?

It’s a meta-poll! But if you have any doubts, you could conduct a survey to determine how your readers would feel about being asked whether you should conduct a poll.

I say do it. Reading the stories with an eye toward which might make the best TV series could be interesting, an exercise (for me) in reading a different way.